A History of the Panama Canal

Ferdinand de Lesseps, developer of Suez Canal in Egypt, began the planned construction of sea-level canal in 1880. Later on, the French realized the monumental challenge ahead of them: along with heavy landslides triggered by incessant rains, there was no specific ways to fight the spread of yellow fever and malaria. De Lesseps comprehended soon that a sea level canal was impractical to build and reorganized efforts toward a lock canal, however funding was withdrawn from the project in 1888. 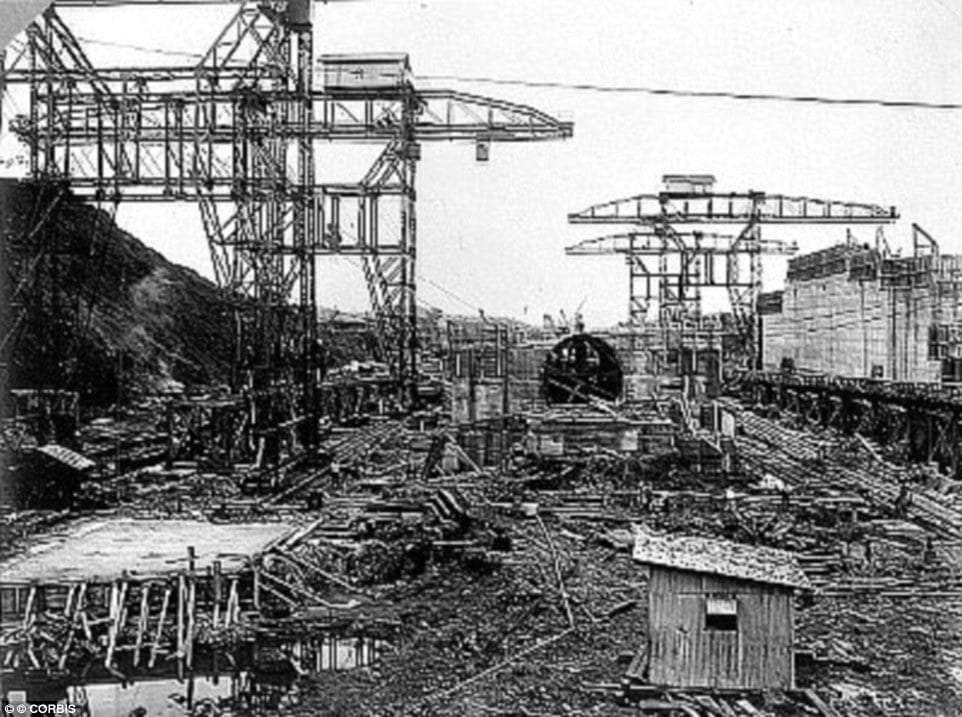 After some deliberations of the U.S. Isthmian Canal Commission and a push from President Theodore Roosevelt, the U.S. acquired the ‘Panama Canal’ project from the French for $40 million in 1902. When the proposed treaty over rights to build was rejected by the Colombian government, the U.S. encouraged and supported Panamanian to gain independence from Colombia. Shortly after Panama secured its independence, U.S. negotiate a deal with the new government in 1903 granting them rights in exchange for financial compensation.

Not fully understanding the lessons from the French effort, the Americans developed plans for a sea-level canal across the approximately 50-mile stretch from Colón to Panama City. The project began with a brief ceremony on May 4, 1904, but chief engineer John Wallace immediately faced problems. Many of the French equipment required repairs, while epidemics of yellow fever and malaria was frightening off the workers. One year after, Wallace resigned because of the continuous pressure in keeping the construction moving forward.

A notable figure in railroad world named John Stevens had been chosen as chief engineer in July 1905 and immediately managed the workforce problems by employing West Indian laborers. Stevens purchased new equipment and developed effective methods to make the work faster, such as using a swinging boom to lift pieces of railroad track and adjusting the train route for hauling away all the dug material. He also realized the risks posed by landslides and persuaded Roosevelt that a lock canal was the best solution. 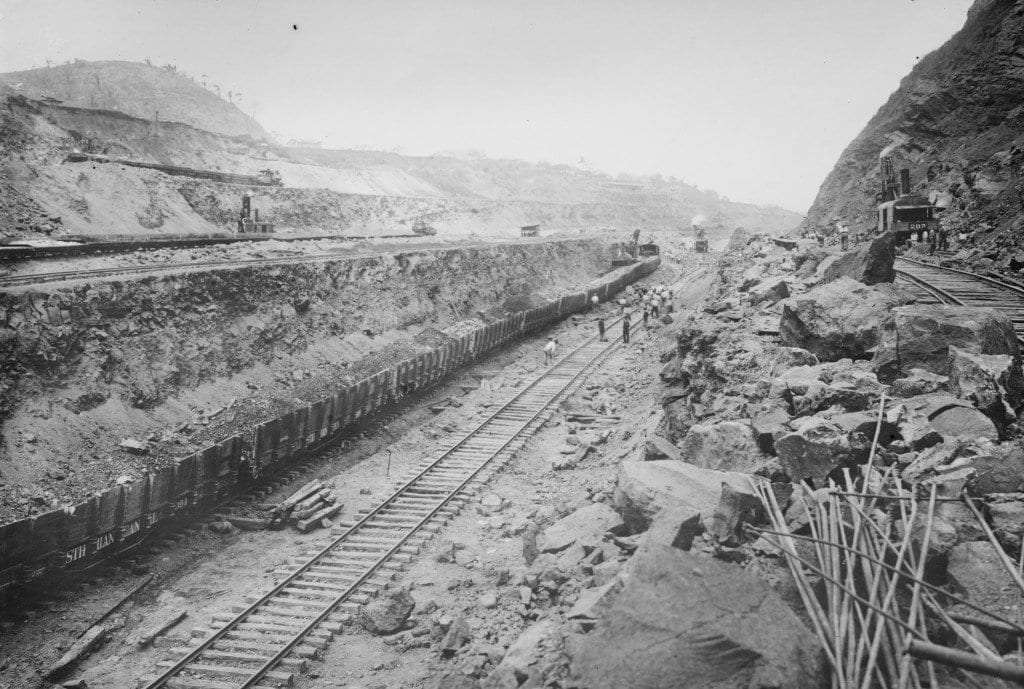 Though construction was according to plan when President Roosevelt visited the area in November 1906, the project suffered a setback when Stevens suddenly retired. Roosevelt got angry and selected Army Corps engineer Lt. Col. George Washington Goethals as being the new chief engineer. Goethals proved to be a serious commander by squashing a work strike after being commissioned and managed to direct addition of new facilities to improve the quality of life for workers.

Goethals efforts focused on Culebra Cut, the excavation between the mountain range of Gamboa and Pedro Miguel. The operation for the nearly 9-mile stretch was 24 hours a day, with more than 6,000 men contributing at any one time. Despite the efforts given to this phase of the project, Culebra Cut was known to be a dangerous area, as many casualties of unpredictable landslides and some dynamite explosions.

Pouring of concrete began at Gatun on August 24, 1909 for the construction of the locks. The lock chambers are built in pairs, each measuring 110 feet wide by 1,000 feet long. The water level is moved by gravity and is controlled by huge valves in the culverts. Eventually, the three locks along the canal route lifted the ships to a height of 26 m (85 ft) above sea level up to Gatún Lake – an artificial lake. A hollow and buoyant steel gates were also built, with varying height of 47 to 82 feet.
In 1913, the project was nearing its completion when two steam shovels working from opposite directions met in the center of Culebra Cut. A few weeks later, the last spillway at Gatún Dam was closed allowing the lake to raise the level of the water to its full height. On October 10, President Woodrow Wilson sent a signal from the White House by telegraph which triggered the explosion to destroy the Gamboa Dike, flooding the Culebra Cut to join the Atlantic and Pacific oceans. 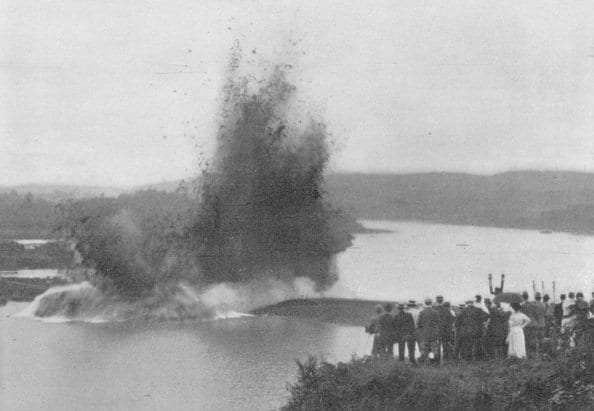 The official opening of Panama Canal was on August 15, 1914, though the original plan of grand ceremony was downgraded because WWI had started. The project costed more than $350 million, making it the most expensive construction project in U.S. history to that point. All in all, about 3.4 million cubic meters of concrete used in constructing the locks, and about 240 million cubic yards of rock and dirt were dug during the construction of American. It is estimated that around 5,600 were killed out of 56,000 workers employed between 1904 and 1913. The S.S. Ancon made its inaugural crossing of the Panama Canal. 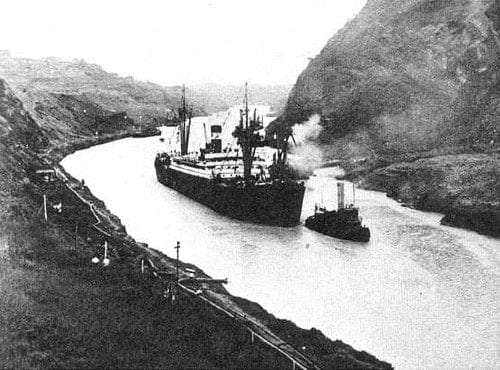 Reinforced by the addition of Madden Dam in 1935, the Panama Canal has been a symbol of development in global trade routes on the 20th century. The Panama control over the canal started when U.S. President Jimmy Carter and Panama leader Omar Torrijos signed a 1977 treaty along with Panama Canal Authority on December 31, 1999. Chosen by the American Society of Civil Engineers (ASCE) as one of the seven wonders of the modern world in 1994, the canal celebrated the 1 millionth vessel that crossed the canal on September 2010.
See our tour itinerary here.
Tour dates and prices here.
Retire in Panama Tours
It’s more than a tour . . it’s an experience.
By Retire in Panama|2019-10-10T12:27:16+00:00November 27th, 2018|Panama General|0 Comments