Boquete, Panama, A Place that You Can Just Relax 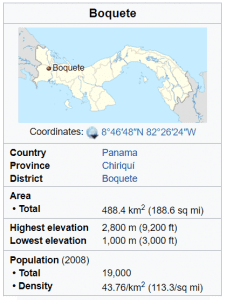 This is another segment of our expat interviews, where Megan will interview Renee, a young retiree, who chose Boquete as her retirement destination.

Boquete, is located in Chiriquí Province, in Western Panama, next to Costa Rica. It sits at the base of Panama’s highest mountain, Volcan Baru, and enjoys an eternal spring-like climate at 1,200 meters (3,900 ft) elevation. The climate is always one of the main reasons that people live here, with 15° C evening lows to 25°C daytime highs (60°F – 78°F), yes, every day of the year.

Boquete is known for its robust expat community. The total population now of the Boquete area is about 25,000, with up to 15% of that population being expats. If you are looking for a community where there is something for you to do, every day, and activities to keep you busy, Boquete is a place to check out.

Boquete has almost everything anyone needs, but for things like the big box stores, shopping malls, movie theaters and the big private hospitals, the city of David is only 30 minutes away. And the beach is only 1 hour away.

The cost of living in Boquete is still quite affordable with rents anywhere from $500 a month, to $2,000 a month, depending on your style and needs. It has the famous Tuesday Market where you can purchase many local products, and meet other expats, it has a great Public Mercado with the locals selling all kinds of food, and there are also 2 large grocery stores.

Megan sat down with Renee in her home in Boquete to discuss why she chose Boquete, and how she is liking it here. Below is the interview.

Renee joined us on the August 2019 Retire in Panama Tour, came to Boquete just two weeks after the tour for a three month trial, and officially moved here in November 2019.

Megan: What made you choose Panama?

Renee: The beauty, the cost of living I had heard about, and its proximity to the US. It’s not too far, so if I want to go back home and be with family or if there’s an emergency, it’s no more than a three hour flight. I feel like I’m not too far away.

Megan: Did you look into any other countries?

Renee: Costa Rica, but the infrastructure was not as good as it is in Panama, like the roads, and internet reliability and all that.

Megan: I forget, did you visit Panama before coming on our tour?

Renee: No, but I have to tell you, and I’ve said this before, but i truly mean it; I already did the tour and now I live here, but I just had so much fun on the tour that I would like to do it again

Megan: We had so much fun with your tour group. I remember the whole week you couldn’t wait to see Boquete, but after seeing the entire country with us, what made you decide on Boquete in the end?

Renee: The large number of expats because I don’t speak Spanish. I am doing duolingo and I’m learning, but I don’t learn as quickly as I used to, so it was important for me to be in a place where I didn’t have to speak the language. Even though I feel like it is my duty to learn, so I am continuing to learn, it is just a slow process. I didn’t want to feel like a fish out of water right away because I couldn’t communicate the basic things.The second biggest reason was the climate. I don’t like the heat. The first two days of the tour were actually my least favorite, even though I got to see the Panama Canal, which everyone should see once in their lifetime, and the restaurants were excellent and everything, but I’m a country girl. I’m not a city girl and I don’t like the heat. I even love the rainy season in Boquete. It’s beautiful and it keeps it even cooler.

Megan: You are one of our tour guests who moved here the quickest. How did the moving process go for you? 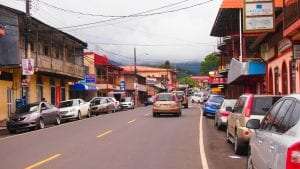 Renee: Well, I knew I was going to move here within a few days of the tour. Everything just aligned for me. I put my house on the market in July, it sold in 12 hours. So I was forced to move in with my daughter. I was looking around the U.S. at various 55+ communities to move to. I wanted somewhere that I could live comfortably on a budget and I wasn’t finding anything that I liked. I had been curious about Panama for a number of years, so I subscribed to your Retire in Panama newsletter. Then I got one of the newsletters and I thought “BINGO” let me go check it out and that’s what I did in August. Then two weeks after the tour, I came back to Boquete for a three month trial. My house was sold and all my stuff was already in storage, so all I had to do was come here with three large suitcases of clothes and stuff. I stayed here in an apartment just up the street for three months, no car, just walking distance to town to see what this is really going to be like. I got immersed really quickly, thanks to meeting Olinda, on the tour. (Olinda is a friend of ours who lives in Boquete and she joined our August tour group for dinner one night). She is one of my closest friends now. I stayed with them for two weeks when I arrived, not because I had to, because I already had a place rented, but who could pass up the opportunity of two weeks of hand-holding? So, I had you guys and I had Olinda right away when I came back, so it wasn’t like I didn’t have anybody. I went with Olinda to church, to the Tuesday market, to the grocery store, and David. Whatever she did, I went with her. So I got a lot of one-on-one education with her.

Megan: Is there anything you don’t like about Boquete? Or something you might warn someone about before they move here?

Renee: Well, yes. The water, power, and internet outages. Although it’s not as bad here as some other places in Panama. I haven’t had a power outage in awhile, but I have had some 6-8 hour power outages here. And I can do without the power, but it can be inconvenient, you know, don’t open the fridge or freezer. But the people, the locals, are all very friendly. I’ve already mentioned all the other reasons I like it here. So, for me the worst part is the occasional outages with water, etc. The water infrastructure is not great here, when you see the water pipes above ground, which they can do because they won’t freeze, but they do break a lot.

Megan: Great, you answered my next question, which was about the power, water and internet infrastructure here. Anything else you’d like to add to that?

Renee: Well, I hate to complain because it is not everyday, but for some people it can be very often, the outages. I like to say “it is what it is” and I really feel that way. You are not in the U.S. anymore.  If you are going to live in Panama, you have to accept the country for the way it is. 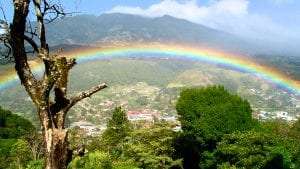 Megan: Right, and it does vary a lot based on where you live. For example, we almost never have water outages in Alto Boquete.

Renee: You guys said it many many times on the tour, that you have to have the right mindset to move here. You cannot come here expecting it to be like the United States. For me, I didn’t want the United States, so I’m fine with it. And as far as the internet, that’s been really good. I only lose the internet when the power goes out. I stream U.S. news on a firestick and all of my shows I watch with Netflix, Hulu, or Amazon Prime.

Megan: How about the medical facilities, have you had a chance to experience them?

Renee: Yes, when I came back permanently, after my three month trial, I got sick and I had bronchitis. I couldn’t breathe well, so I went to a doctor’s office in town. It was a $12 doctors visit and he wrote me a prescription and I got that at the pharmacy. For basic stuff like that, you don’t even really need health insurance because it is so affordable. The doctor spoke very good English too. I don’t have health insurance here. I’m planning to get global health insurance in the U.S. because I get subsidized health insurance being a retired federal government worker and if I let that go, I never get it back. When I looked into health insurance here, I realized it was going to be around the same price for a global plan, so I just decided I’m going to keep the one I had and then I’ll be covered wherever I go. Right now, my plan is to be here (in Panama) until I can’t be independent anymore, but I just don’t know, so I figured better to go with the plan in the States in case I end up back there.

Megan: Can you give me one word or phrase to sum up your life in Boquete?

Renee: Relaxed. I take things at my own pace. I get involved just as much as I want or as little as I want. It’s my life now. I don’t answer to a boss. I don’t do things I don’t want to do and I don’t go places I don’t want to go. It’s freedom and it’s relaxing. For people my age, people who are retired, I don’t think you could ask for better.

I took this exceptional tour last year. From the moment you are greeted at the airport by Oscar and Megan, you know you are in good hands. This was an exploratory tour for me to determine if I wanted to move to Panama for retirement. Turned out to be the best vacation I ever had! Oscar’s tour groups are kept very small for a reason. Individualized attention, experience and knowledge was shared with the group non-stop. Everywhere we went- every hotel, every restaurant, every sightseeing venue had been carefully thought out and added to the enjoyment of the trip. We traveled across the country in a very comfortable 10 seater van which was small enough to hear every question, every answer, every conversation. Our small group quickly became good friends and it was like taking a vacation with your family. I returned to Panama two weeks after my tour and stayed for three months. Now I am going to move here permanently. Thanks Oscar, Megan and Rod!