Panama, It’s Time to Stop Being Scared, and Start Being Cautious, Have Hope, and Re-Open Our Economy

An Op-Ed by Rod – We typical do not post op-ed type content on this site, sticking more to factual content, but in these times, Oscar and I believe some personal opinions are warranted, and we are both in agreement with the following, and we wanted to share with our readers.  We also invite your opinions, which you can comment at the bottom.

One of the things I have noticed throughout the world in this COVID-19 crisis, is the extreme sensationalism in the news media and governments. Why always lead with deaths, instead of recoveries? Why lead with new cases, instead of stories of people beating the virus? Yes the deaths are horrible, but are the recoveries not reason to celebrate? Panama has been no different in the first six weeks of our crisis; since case 0, every day the government is sharing first the accumulated number of cases, and daily cases. And the media follows suit. 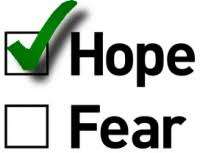 I suppose for the government this is simply to instill fear in the people, so they follow the orders, which are set in place to protect them. And for the media, in today’s digital world, it’s only about clicks to their website and social media properties, as that is what brings revenue. Fear sells…joy, not so much.

We in Panama currently have more recoveries than active cases, and the government and media can no longer hide that. It is time to implement our country’s reopening plan, announced a couple days ago.  It’s time for hope, not fear.

Let me show you an example of this fear. The most popular graph that the government releases, and the media publishes daily, is new cases, which is below. It is a graph of accumulated cases of COVID-19, since Case 0, which in Panama was March 9th. The problem with this graph is that it will never “flatten” as it is an accumulated graph, if you get one more case in a day, it goes higher, if you get no cases in a day, there is no entry. So people are looking for the “flatten the curve” that everyone is talking about, but they are not seeing it, so they have fear. 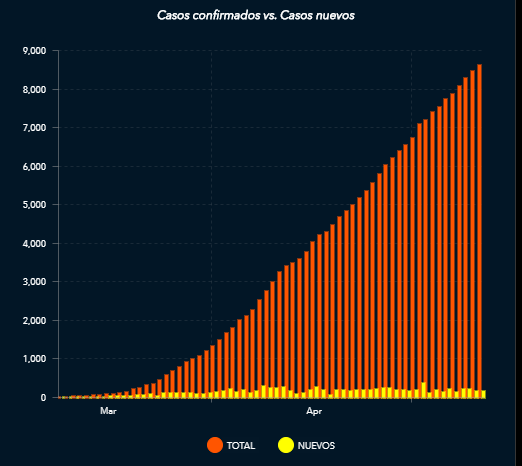 Now, if just one line was added to this chart (active cases) you would get a chart that does not instill fear in people, but instead would instill confidence that the lock down we have is working, although caution still is needed. The white line added, is the amount of active cases, showing that Panama is doing great. Now people can see the hope. 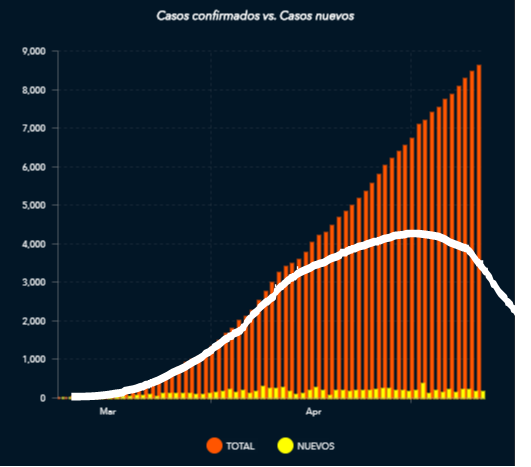 The chart above shows our country in a much better position than what the government and media has been telling us for many weeks. In fact, the feelings this chart invokes in people are more like relief, caution, comfort, and satisfaction. When the government and media outlets show us images and headlines that create fear, they also create despair, anxiety, depression, and unrest, which can lead to civil disobedience, the response that governments are trying to avoid.

I want to make it clear that I do support most of Panama’s actions to control the spread of Coronavirus, yes even the quarantine lock down. Panama’s biggest objective with the lock down was to keep the ICU beds available, and not to have the hospitals overrun.  They accomplished that, a great job, resulting in one of the lowest death rates in Latin America. After hearing the government’s plans a couple of nights ago about the 6-phase return to “new normal,” which starts today, I am also mostly in support. We need some more definitive dates from the government, and some ease from this lock down, but I think we are a short time away from that now. I think the only way anyone could be in 100% support of any policy or procedures, is if you wrote those policies or procedures yourself. There is always going to be some discord, and “I think they could have done this better” comments.

Governments do what they need to do, I guess. With the recent announcement of our return to the “new normal”, the government will now need the support of the people to do that. So, as of today, the government is proudly announcing the active cases and recoveries instead of accumulated cases on their website, showing people the hope they should have been showing a month ago. Better late than never. 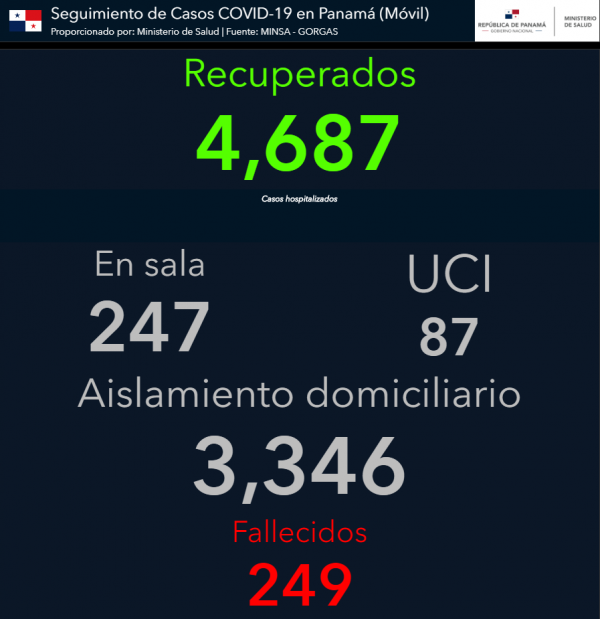 Many of you have heard a lot about the measures that Panama has taken to control this virus, and we are now in a good position to start our re-opening. We have less than 40% of people who had the coronavirus, still infected. We have more than 50% of our hospital beds and ICU beds empty. We have a contagion level (Rt level) of less than 1. All of these things were possible with the measures the government put in place. Now, I have heard from many of you by email, and several expats living here, that because of these draconian government measures, you will not move here, or you are moving back to your home country. I can put that into perspective very quickly.

COVID-19: How You Could Go to Jail for Breaking Stay-at-Home Order in Colorado source

A Panama person that violates quarantine, gets a $50 traffic ticket. It does go up the next time. In Panama, it is not a criminal offense to violate these government laws, even in this state of emergency. The Panama constitution held up well, when a few renegade ministers entered a bill in the legislature two weeks ago which would criminalize quarantine violators with up to 3 – 5 year prison sentences. This bill was quickly and resoundingly defeated.

One of the reasons I moved to Panama is it’s constitution. (I have a link to an English version below, that some of you may like to read if you are deciding on moving here). Panama has no military as part of it’s constitution, and no ability to impose martial law. So myself, as somewhat of a “tolerant” libertarian (I am not referencing the US Libertarian Party here, as I am not from the US myself), I was uneasy at first when the lock down was announced, but as I watched it’s success, I accepted it. My right to food, medicine, shelter and the privacy in my own home were not affected. In order to have a functional and healthy society, sometimes it may be necessary to follow a few rules you don’t like.

Now, was Panama’s approach to COVID-19 correct?  I don’t know, no one does.  But I think it could be one of the model countries to look at in a year from now. By using the word “model” I do not mean the best, but a country that used one consistent approach against the virus. Countries like Japan, Singapore, Sweden and Panama all had different approaches to handling COVID-19, and when it is all over their numbers and their economies can be studied and hopefully we learn something from them, for next time. Countries like USA and Canada, use the approach of every State/Province or City on their own, with no central leadership,  will not be a good model.  I think what is important, and countries that will do the best, are ones with a national approach to the health of its citizens.

Why will I continue to stay in Panama? Throughout this crisis, I saw a government and its president lead a country through the crisis. I saw lower governments trying to reject and abuse their power, and witnessed a country’s constitution hold up. Whenever you have a crisis of this magnitude, division will never win, but unity will. Yes, Panama is the place for me, and my love affair with it has grown, and I have gotten to know it even better. With Retire in Panama Tours, I will be there to help you make that decision for yourself, if Panama is right for you.

We cannot yet tell you when we will resume our tours yet, but with Phase 1 starting today, we need to get to phase 4, which is hotels and restaurants opening, while there is no date of Phase 4 yet, the government here is hoping for 2 weeks between phases. So lets stay in touch, as Panama begins to open its airports and business and we will be ready to welcome you to this great country. Over the next few weeks Oscar and I will be implementing whatever protocols are necessary into our business, to keep you safe and give you the best experience possible, when you do come with us on a tour.